Barbara Burleigh holds a joint appointment as Professor in the Departments of Immunology and Infectious Diseases as well as the Department of Molecular Metabolism.  After obtaining her Ph.D. in molecular and cellular parasitology from the University of Western Ontario, Dr. Burleigh trained as a postdoctoral fellow at Yale School of Medicine, where she gained expertise in the cell biology of host-pathogen interactions.

As an obligate intracellular parasite that lives in the cytoplasm of its mammalian host cell, the Chagas’ disease parasite, Trypanosoma cruzi, forges functional connections with its host cell in order to survive. In other words, T. cruzi becomes part of an integrated biological system: the ‘host-parasite network’. Research in my laboratory seeks to understand how T. cruzi exploits host functions to establish intracellular infection in mammalian cells. Our general approach has been to view this relationship through the lens of the mammalian host cell, where our studies have probed mechanisms of host cell entry by T. cruzi, identified cellular pathways that support intracellular replication of the parasite and have determined the impact of infection on host gene expression and physiology. In these efforts, we have exploited a combination of genomic, transcriptomic and cell biological approaches. With the advancement of genome-scale technologies, we are now in a position to integrate parasite and host gene expression data with host functional genomic data to expose biological networks representing metabolic cross talk between host and parasite. Our recent functional genomic studies, for example, indicate critical points in host metabolic networks to which T. cruzi parasites couple their metabolic needs. The role of host cellular metabolism in supporting T. cruzi infection is a new area of investigation in the Chagas’ disease field that we are excited to develop with key collaborators. These studies will provide essential insights into the fundamental basis for T. cruzi parasitism, which has the potential to be leveraged in the development of novel therapeutics for Chagas’ disease.

Current projects in the lab include the study of host fatty acid metabolism and its role in fueling T. cruzi replication in myoblasts and iPSC-derived human cardiomyocytes; the role of host cytoskeletal dynamics in supporting intracellular parasite growth; and the use of transcriptomic signatures (RNA-Seq) to predict metabolic and functional adaptation in T. cruzi developmental stages and across recent parasite isolates. 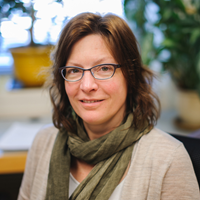