Shruthi Mahalingaiah is an assistant professor of environmental, reproductive, and women’s health in the Department of Environmental Health at the Harvard T.H. Chan School of Public health. She serves clinically as a physician specializing in ovulation disorders, reproductive endocrinology and infertility at the Massachusetts General Hospital in the Department of Obstetrics and Gynecology.

Dr. Mahalingaiah’s research seeks to understand the association of environmental and modifiable risk factors on human reproduction as they pertain to the etiology and prevention of gynecological disease. Through physiology-informed research, she focuses on identifying environmental exposures associated with the development of polycystic ovary syndrome (PCOS) and metabolic sequelae. Her research encompasses three distinct areas: 1.) Air pollution and gynecologic disease incidence including cardiometabolic risk across the reproductive lifespan; 2.) Environmental toxicant exposures in the perinatal, perimenarchal, and adult time window with placental disease and ovulatory disorders; and 3.) Creation of diverse cohorts to study women’s health across the reproductive lifespan. She is currently funded by the March of Dimes, National Science Foundation, and is on the leadership team of the Apple Women’s Health study.

She was awarded the 2016 Endocrine Society Early Investigator award, an Ellison Family Foundation award, and an RSDP seed grant in 2017–2018 to create a pilot online study of ovulation and menstruation health. Supported by a Thomas J. Watson III Fellowship, she lived with indigenous shamans in the Ecuadorian Amazon Basin, Andes mountains, and Bali studying the role of ritual in the healing process. She was previously supported by K level funding from the Building Interdisciplinary Research Careers in Women’s’ Health (BIRCWH 2011–2014) and the Reproductive Scientist Development Program (RSDP 2104–2017) to study environmental exposures and incidence of benign gynecologic conditions.

Dr. Mahalingaiah holds a BA from Middlebury College, an MD from Harvard Medical School, and an MS in epidemiology from Boston University’s School of Public Health. Prior to joining the Harvard Chan School, Dr. Mahalingaiah completed an OB/GYN residency at the Massachusetts General/Brigham and Women’s Hospital (MGH/BWH) combined program. She was a fellow in reproductive endocrinology and infertility at BWH which led to her appointment as an assistant professor of reproductive endocrinology and infertility in the Department of Obstetrics and Gynecology at Boston Medical Center and Boston University School of Medicine to serve the fertility aspirations of under-resourced populations. In 2016, she was appointed assistant professor in the department of epidemiology at Boston University School of Public Health and was appointed assistant professor in the department of physiology and biophysics at the Boston University School of Medicine the following year. 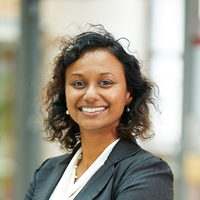