Gortmaker SL, Must A, Perrin JM, Sobol AM, and Dietz WH. Social and economic consequences of overweight among adolescents and young adults. New England Journal of Medicine, 1993;329:1008-12.

Gortmaker SL, Must A, Sobol AM, Peterson K, Colditz GA, and Dietz WH. Television viewing as a cause of increasing obesity among children in the United States, 1986-1990. Archives of Pediatrics and Adolescent Medicine, 1996;150:356-362.

My research is focused on the health of children and adolescents, particularly households living in poverty and minority populations. The major goal of this research has been to identify modifiable risks for morbidity and mortality in the young, and to both initiate and evaluate interventions to improve these outcomes. I have focused on a broad variety of risks, ranging from concepts such as income poverty, social stress and social networks, to behaviors including smoking, television viewing, diet and physical activity. Interventions have included work at the level of national, state, city and organization policy, as well as programs at the regional, county, school, hospital, clinic and individual level. Research includes collaborative work with research groups at Harvard, in the Boston area, nationally, and internationally.

I direct the Harvard School of Public Health Prevention Research Center (HPRC). Established in 1998, the HPRC is one of 33 centers funded by the Centers for Disease Control and Prevention (CDC). Our mission is to work with community partners to design, implement, and evaluate programs that improve nutrition and physical activity, reduce overweight and reduce chronic disease risk among children and youth. HPRC projects involve community partners in every phase: conceptualization, design, planning, implementation and evaluation. Our long-term goals are to build community capacity to implement and evaluate effective prevention programs and to advance national knowledge regarding interventions that promote nutrition and physical activity.

Current activities include continuing implementation, dissemination and updating our school curriculums. Our Planet Health and Eat Well and Keep Moving curricula are is in use throughout the United States and in many other countries. Both programs have been shown to reduce obesity risk behaviors in experimental trials and are cited in the Guide to Community Preventive Services. Teacher training slides are available on our website: (www.hsph.harvard.edu/prc).

Other collaborations include the Donald and Sue Pritzker Nutrition and Fitness Initiative, which I co-direct with Frank Hu. A portion of this initiative funds an innovative research project being conducted with the nation’s YMCAs.

New initiatives include the Nutrition and Policy Research and Evaluation Network (NOPRN) funded by the CDC, and the work of COMnet, the Childhood Obesity Modeling Network, funded by the Robert Wood Johnson Foundation and NICHD of NIH. 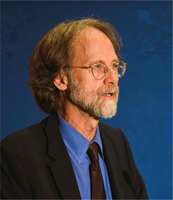 Professor of the Practice of Health Sociology