Dr. Williams is an internationally recognized social scientist focused on social influences on health. He has been invited to keynote scientific conferences in Europe, Africa, Australia, the Middle East, South America and across the United States. His research has enhanced our understanding of the complex ways in which socioeconomic status, race, stress, racism, health behavior and religious involvement can affect health. He is the author of more than 475 scientific papers and he has served on the editorial board of 12 scientific journals and as a reviewer for over 75 others. The Everyday Discrimination Scale that he developed is the most widely used measure of discrimination in health studies.

With funding from the National Institutes of Health and the sponsorship of the World Health Organization, Dr. Williams directed the South African Stress and Health Study, the first nationally representative study of the prevalence and correlates of mental disorders in sub-Sahara Africa. This study assessed the effects of HIV/AIDS, exposure to racial discrimination and torture during apartheid, on the health of the South African population. He was also a key member of the team that conducted the National Study of American Life, the largest study of mental health disorders in the African American population in the U.S. and the first health study to include a large national sample of Blacks of Caribbean ancestry.

Dr. Williams has been involved in the development of health policy at the national level in the U.S. He has served on the National Committee on Vital and Health Statistics and on nine committees for the National Academy of Medicine, including the committee that prepared the Unequal Treatment report. He also served as a member of the MacArthur Foundation’s Research Network on Socioeconomic Status and Health. Dr. Williams has played a visible, national leadership role in raising awareness levels of the problem of health inequalities and identifying interventions to address them. He served as the staff director of the Robert Wood Johnson Foundation’s Commission to Build a Healthier America. This national, independent and nonpartisan health commission was focused on identifying evidence-based non-medical strategies that can improve the health of all Americans and reduce racial and socioeconomic gaps in health. He has also worked on ethnic inequities with the Toronto Public Health Department, the National Health Service in the U.K. and the Pan American Health Organization.

He or his research has been featured by some of the nation’s top print and television news organizations and his TEDMED talk was released in April 2017. He was also a key scientific advisor to the award-winning PBS film series, Unnatural Causes: Is Inequality Making Us Sick? 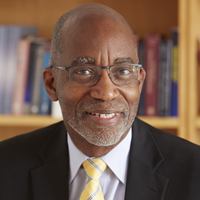