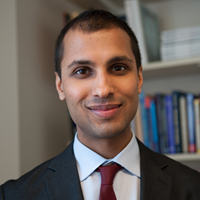 Before joining HPM, Dr. Pandya served as Assistant Professor of Healthcare Policy and Research with a secondary appointment in the Department of Radiology at Weill Cornell Medical College from 2012-2014. He graduated from the Harvard PhD Program in Health Policy in 2012, and holds an MPH from Yale University in Health Policy and Administration and a BS from Cornell University in Nutritional Sciences. Prior to entering the PhD program, he worked for two years at a health economics/outcomes research consulting firm.

He received the "Outstanding Paper by a Young Investigator Award" from the Society for Medical Decision Making (SMDM) in 2016, and was one of three recipients of the "Teaching Citation Award" from the Harvard T.H. Chan School of Public Health in 2017. He received a "Centre for Health Economics Research Fellowship Award" from the University of York in 2018 (visitation in 2019). He was elected as an SMDM trustee in 2019. Dr. Pandya has received grant funding as principal investigator from the National Institutes of Health (R01NS104143, 2018-2023) and the American Heart Association (14CRP18730014, 2014-2015).

A Comprehensive Covid-19 Response - The Need for Economic Evaluation.

Cost-Effectiveness of Early Intervention in Psychosis: A Modeling Study.

Affordability and Value in Decision Rules for Cost-Effectiveness: A Survey of Health Economists.

Human Immunodeficiency Virus transmission by HIV Risk Group and Along the HIV Care Continuum: A Contrast of 6 US Cities.

COVID-19 Vaccine Boosters for All Adults: An Optimal U.S. Approach?

Attributing health benefits to preventing HIV infections versus improving health outcomes among people living with HIV: an analysis in six US cities.

Improving health equity and ending the HIV epidemic in the USA: a distributional cost-effectiveness analysis in six cities.

Access to Mechanical Thrombectomy for Ischemic Stroke in the United States.

Just because a particular health care service is considered not cost effective doesn’t mean it shouldn’t be used, according to a recent article co-authored by Harvard Chan School’s Ankur Pandya.

During the pandemic, Harvard Chan School's Department of Health Policy and Management got creative with virtual programming to keep faculty, staff, and students feeling connected. Probing cost-effective strategies for statin use among African Americans