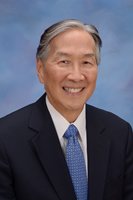 From 2009-2014, Dr. Koh was the 14th Assistant Secretary for Health for the U.S. Department of Health and Human Services (HHS), after being nominated by President Barack Obama and being confirmed by the U.S. Senate. During that time, he oversaw 12 core public health offices, including the Office of the Surgeon General and the U.S. Public Health Service Commissioned Corps, 10 Regional Health Offices across the nation, and 10 Presidential and Secretarial advisory committees. He served as senior public health advisor to the HHS Secretary and in that capacity oversaw Healthy People 2020 (the nation’s public health agenda), promoted the disease prevention and public health dimensions of the Affordable Care Act, advanced outreach to enroll underserved and minority populations into health insurance coverage, helped to coordinate federal response during the 2009 H1N1 pandemic and was the primary architect of landmark HHS strategic plans for tobacco control, health disparities (including Asian American Native Hawaiian and Pacific Islander health) and chronic hepatitis. He led interdisciplinary implementation of the National HIV/AIDS Strategy as well as initiatives in nutrition and physical activity (including HHS activities for Let’s Move!), cancer control, adult immunization, environmental health and climate change, women’s health, adolescent health, behavioral health and substance use disorders, health literacy, multiple chronic conditions, organ donation and epilepsy.

In his academic career, Dr. Koh has been Principal Investigator for over $27 million in research grant activities and published more than 300 articles in the medical and public health literature. His publications and writing address broad areas, such as disease prevention and health promotion, health reform, health equity (including Asian American, Native Hawaiian and Pacific Islander health), health and spirituality, public health emergency preparedness and the Covid-19 pandemic, health literacy and public health leadership. He has also published on specific topics such as tobacco control and cancer control, melanoma and skin oncology, the opioid crisis, health issues of the homeless, chronic hepatitis, climate change, organ donation and epilepsy.

From 1997-2003, Dr. Koh was Commissioner of Public Health for the Commonwealth of Massachusetts after being appointed by Governor William Weld. As Commissioner, he led the Massachusetts Department of Public Health, which included a wide range of health services, four hospitals, and more than 3,000 health professionals. He emphasized the power of prevention and strengthened the state’s commitment to eliminating health disparities, while advancing progress in areas such as tobacco control, bioterrorism response after 9/11 and anthrax, newborn screening, organ donation, suicide prevention and international public health partnerships.

Dr. Koh graduated from Yale College, where he was President of the Yale Glee Club, and the Yale University School of Medicine. He completed postgraduate training at Boston City Hospital and Massachusetts General Hospital, serving as chief resident in both hospitals. He has earned board certification in four medical fields: internal medicine, hematology, medical oncology, and dermatology, as well as a Master of Public Health degree from Boston University. At Boston University Schools of Medicine and Public Health, he was Professor of Dermatology, Medicine and Public Health as well as Director of Cancer Prevention and Control.

He has earned over 70 awards and honors for interdisciplinary accomplishments in medicine and public health, including six honorary doctorate degrees. President Bill Clinton appointed Dr. Koh as a member of the National Cancer Advisory Board (2000-2002). He has received the Dr. Martin Luther King Jr. Legacy Award for National Service and the Distinguished Service Award from the American Cancer Society. He was awarded the 2014 Sedgwick Memorial Medal from the American Public Health Association (APHA) (the highest honor of the organization) and at the same time was named one of the first four inductees into the APHA’s Asian Pacific Islander Caucus. He is an elected member of the National Academy of Medicine (formerly the Institute of Medicine). A past Chair of the Massachusetts Coalition for a Healthy Future (the group that pushed for the Commonwealth’s groundbreaking tobacco control initiative), Dr. Koh was named by the New England Division of the American Cancer Society as “one of the most influential persons in the fight against tobacco during the last 25 years”. He was named to the K100 (the 100 leading Korean Americans in the first century of Korean immigration to the United States) and has received the Boston University Distinguished Alumnus Award. He has been named by Modern Healthcare as one of the country’s Top 100 Most Influential People in Healthcare as well as one of the Top 25 Minority Executives in Healthcare.

Other recognition includes the Champion Award from the Campaign for Tobacco Free Kids, the
“Hero of Epilepsy” Award from the Epilepsy Foundation, the Distinguished National Leadership Award from the National Colorectal Cancer Roundtable, the Baruch S. Blumberg Prize from the Hepatitis B Foundation, the National Leadership Award from the Community Anti-Drug Coalitions of America (CADCA) and the Dr. Jim O’Connell Award from the Boston Healthcare for the Homeless Program. In 2019, HHS established the annual Dr. Howard K. Koh Award for Excellence in Leadership, sponsored by the Federal Asian Pacific American Council. In 2021, he was named the inaugural Bayer Fellow in Health and Tech at the American Academy in Berlin. He enjoys the distinction of throwing out the ceremonial first pitch on two different occasions: at Nationals Park (2011) in Washington DC on behalf of HHS and at Fenway Park (2003) where he was designated a “Medical All Star” by the Boston Red Sox in recognition of his national contributions to the field of early detection and prevention of melanoma.

He serves on the Board of Directors of the Journal of the American Medical Association (JAMA), Truth Initiative, the Network for Public Health Law, the Josiah Macy Jr. Foundation and New England Donor Services. Dr. Koh and his wife Dr. Claudia Arrigg are the proud parents of three adult children and the proud grandparents of three granddaughters.

The Tobacco Industry and Harm Reduction.

Establishing Academic Homes for Homelessness: A Call to Action.

Spirituality in Serious Illness and Health.

Progress in Reducing Disparities in Premature Mortality in the USA: a Descriptive Study.

The Tobacco Wars' Lessons for the Vaccination Wars.

Responding to the opioid crisis in North America and beyond: recommendations of the Stanford-Lancet Commission. For immediate release: July 12, 2022 Boston, MA—Spirituality should be incorporated into care for both serious illness and overall health, according to a study led by researchers at Harvard T.H. Chan School of Public Health and Brigham and… Harvard Chan School's two-year-old course on homelessness and health is one of many pieces of the School’s new pilot Initiative on Health and Homelessness (IHH), an effort aimed at advancing education, research, and practice regarding housing instability’s devastating… How spirituality can benefit medicine

Bringing spirituality into medicine can benefit both patients and doctors, according to experts. What led to the opioid crisis—and how to fix it

Howard Koh, professor of the practice of public health leadership, discusses factors contributing to the opioid crisis and recommendations on how to curb it.