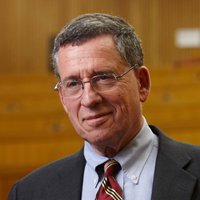 Dr. Robert J. Blendon is currently the Richard L. Menschel Professor of Public Health and Professor of Health Policy and Political Analysis, Emeritus, at the Harvard T.H. Chan School of Public Health. He holds appointments as a Professor of Health Policy and Political Analysis at both the Harvard T.H. Chan School of Public Health and the Harvard Kennedy School of Government. In addition, he directs the Harvard Opinion Research Program, which focuses on better understanding of public knowledge, attitudes, and beliefs about major social policy issues in the U.S. and other nations. He currently co-directs the Robert Wood Johnson Foundation/Harvard T.H. Chan School of Public Health project on understanding Americans' Health Agenda, including a joint series with National Public Radio and POLITICO. Previously, he co-directed a special polling series with the Washington Post and Kaiser Family Foundation, which was nominated for a Pulitzer Prize. Additionally, Dr. Blendon co-directed a special survey project for the Minneapolis Star Tribune on health care that received the National Press Club's 1998 Award for Consumer Journalism. He also co-directed a project for National Public Radio and the Henry J. Kaiser Family Foundation on American attitudes toward domestic policy. The series was cited by the National Journal as setting a new standard for use of public opinion surveys in broadcast journalism.

Between 1987 and 1996 he served as Chairman of the Department of Health Policy and Management at the Harvard T.H. Chan School of Public Health and as Deputy Director of the Harvard University Division of Health Policy Research and Education. Prior to his Harvard appointment, Dr. Blendon was senior vice-president at The Robert Wood Johnson Foundation. In addition, he has served as a senior faculty member for the U.S. Conference of Mayors, the National Governor's Association, and the U.S. Congress Committee on Ways and Means.

Dr. Blendon is a member of the Institute of Medicine, of the National Academy of Sciences and of the Council of Foreign Relations, a former member of the advisory board to the Director of the Centers for Disease Control and Prevention, and a former member of the editorial board of the Journal of the American Medical Association. He is also a Past President of the Association of Health Services Research and winner of their Distinguished Investigator Award. He is also a recipient of the Baxter Award for lifetime achievement in the health services research field. He has also received the John M. Eisenberg Excellence in Mentorship Award from the Agency for Healthcare Research and Quality (AHRQ) and the Mendelsohn award from Harvard University. In 2008, he was the recipient of the Warren J. Mitofsky Award for Excellence in Public Opinion Research given by the Roper Center.

He is a graduate of Marietta College. He is also a graduate of the School of Business at the University of Chicago, with a Masters in Business Administration. In addition, he holds a Doctoral degree from the School of Public Health of Johns Hopkins University, where his principal attention was directed toward health policy.

Telehealth use and Satisfaction among U.S. Households: Results of a National Survey.

The Future of Health Policy in a Partisan United States: Insights From Public Opinion Polls.

How do health care experiences of the seriously ill differ by disease?

A recent poll found that more than 4 in 10 parents of school-aged children think that mask-wearing to protect against COVID-19 harmed their kids’ overall scholastic experience. There is broad support among Americans for letting the government negotiate prescription drug prices, according to a recent poll designed by Harvard T.H. Chan School of Public Health’s Robert Blendon. The poll asked respondents to select their top…

Only one-third of Americans believe the recently passed COVID relief package will significantly help them, according to a new poll led by Harvard T.H. Chan School of Public Health. The poll, which surveyed 1,008 adults in late March…

During the COVID-19 pandemic, Americans’ opinions on a variety of health and social issues have shifted, according to new research led by Harvard T.H. Chan School of Public Health. An analysis of 18 polls conducted during 2020 found…

Perspective: How U.S. health policy may play out given partisan divide

Democrats’ and Republicans’ profound divisions on key issues of health care policy will play a large role in how the Biden administration and Congress address these issues in the near future, according to a new article by Harvard…