The major interest of my laboratory is to study the regulatory pathways, which control glucose and lipid metabolism. Our biochemical and genetic studies focus on signal transduction using cultured mammalian cells as well as transgenic animals to identify specific abnormalities in these pathways, which are involved in human metabolic and inflammatory diseases including obesity, diabetes, fatty liver disease, atherosclerosis, and asthma.

Lineage Commitment and Differentiation of Adipocytes and Control of Energy Metabolism

One of the most fundamental questions in biology is how different cell types commit to specific lineages and regulate their terminal differentiation program. To understand this process, we use adipogenesis as a model system and study the molecules, which control early stages of differentiation in these cells. We have recently identified a family of transcription factors, which play a critical role in adipocyte differentiation. The molecular mechanisms underlying their biology are currently being studied using molecular and cellular approaches as well as mouse genetics. Through this line of research, we hope to generate insights into the process of adipocyte differentiation and the integration of positive and negative hormonal and metabolic signals that regulate the program of differentiation, which could assist the development of new tools for prevention and treatment of obesity.

Inflammatory and Stress Pathways and Molecular Basis of Metabolic Disorders

Recent years have witnessed a significant revision of the traditional view of fat cells as simple stores of excess energy. Studies in our lab, as well as many others, have clearly demonstrated that adipocytes produce and regulate many metabolic and hormonal signals, which generate profound effects on systemic endocrine equilibrium. In our earlier studies, we have also demonstrated that these cells exhibit an inflammatory capacity which is abnormal in obesity and key to the pathogenesis of insulin resistance and diabetes. Recently, we identified key molecular mechanisms underlying the link between inflammatory responses and insulin action. These pathways include obesity-related activation of the serine.threonine kinase, JNK, and the consequent inhibition of insulin receptor signaling via phosphorylation of a substrate of insulin receptor, IRS-1. In mice lacking JNK genes, there is dramatic protection from obesity and diabetes. There is also genetic evidence that JNK activation is linked to type 2 diabetes in humans. These studies have recently led our group to the discovery of endoplasmic reticulum stress as a central mechanism linking metabolic stress with insulin resistance and type 2 diabetes. The mechanisms leading to ER stress and targeting these pathways for novel therapeutic strategies are also being explored.

The nutrient content of diet has a profound influence on a number of vital physiological pathways. Furthermore, a strong link exists between the dietary trends and a number of common diseases such as cancer, diabetes and atherosclerosis. We approach the molecular basis of these interactions by focusing on fatty acid-mediated transcriptional regulation in cells and the biological role of fatty acid binding proteins (FABP) as lipid chaperones involved in intracellular lipid trafficking. We have developed several mice models that are deficient in adipocyte/macrophage FABPs and demonstrated that these animals were protected from some of the most detrimental effects of dietary intake of high levels of calories and fatty acids through alterations in the gene expression pattern of adipocytes, macrophages and systemic metabolic responses. We have so far demonstrated that FABPs are central to many components of the metabolic syndrome, including obesity, insulin resistance, type 2 diabetes and cardiovascular disease. These proteins are also proximal to generation of the inflammatory responses, especially upon exposure to lipids. Using FABP-deficient animals and cells as model systems, we are trying to establish the components of the signaling pathway that is controlled by FABPs and the mechanisms by which these pathways are linked to inflammatory and metabolic responses. We hope to generate insights into the mechanisms leading to obesity, diabetes and atherosclerosis and create novel preventive and therapeutic opportunities. 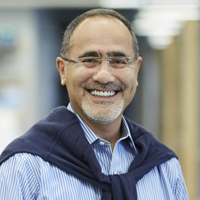