Findings Could Lead to More Effective Treatment for Global Disease

Boston, MA — A new study led by Harvard School of Public (HSPH) researchers provides a novel explanation as to why some tuberculosis cells are inherently more difficult to treat with antibiotics. The discovery, which showed that the ways mycobacteria cells divide and grow determine their susceptibility to treatment with drugs, could lead to new avenues of drug development that better target tuberculosis cells.

The study appears December 15, 2011 in an advance online edition of Science.

“We have found that the consequences of the simple and unexpected patterning of mycobacterial growth and division means some bacterial cells have the capacity to survive in the face of antibiotics,” said Bree Aldridge, a postdoctoral fellow at HSPH and co-first author of the study.

Tuberculosis is an infectious disease that kills more than 1.5 million people annually. It is a difficult disease to treat; people are prescribed a combination of antibiotics to be taken daily for six to nine months, a regimen that is hard for patients to follow and for nurses and doctors to administer. Even after beginning appropriate treatment, it appears that some of the infectious cells survive for long periods of time.

The HSPH researchers, led by Aldridge, co-first author and visiting scientist Marta Fernandez-Suarez, and senior author [[Sarah Fortune]], assistant professor of immunology and infectious diseases, along with colleagues from Massachusetts General Hospital, set out to determine what distinguishes a cell that lives from one that dies. They designed a unique microfluidic chamber in which they grew Mycobacterium smegmatis cells (which behave similarly to Mycobacterium tuberculosis cells) and filmed their growth with a live-cell imaging system. 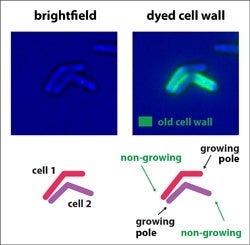 Mycobacterium smegmatis cell walls were stained with a green fluorescent dye. Following staining, the cells were grown in stain-free media, and new growth is unlabeled (appearing blue) while the old cell wall retains the green dye. Pictured here are two cells that have grown asymmetrically, each with a green pole (non-growing and made up of old, stained cell wall) and a blue pole (growing and made up of new cell wall).

The researchers speculated that these physiologically distinct subpopulations of cells would translate into differences in their susceptibility to antibiotics, which target processes essential for growth and division. To test this hypothesis, they treated the cells with different classes of antibiotics and observed how subpopulations of daughter cells responded.

The results showed that the different daughter cells exhibited varying susceptibilities to the treatments, strong evidence that populations of mycobacterial cells contain cells that are inherently tolerant of antibiotics and providing an important piece to the puzzle of why tuberculosis is such a difficult disease to treat.

“It is surprising to discover that mycobacteria differ from other bacteria such as E. coli in such a fundamental way,” said Fortune. “It is easy to assume that most bacteria work in a similar fashion. While that’s true sometimes, this study shows that bacterial species, such as TB, may be strikingly different from each other and thus require different methods of treatment.” The researchers hope that their findings lead to the development of treatment regimens in which antibiotics are combined to specifically target tolerant subpopulations of cells.

Harvard School of Public Health is dedicated to advancing the public’s health through learning, discovery and communication. More than 400 faculty members are engaged in teaching and training the 1,000-plus student body in a broad spectrum of disciplines crucial to the health and well being of individuals and populations around the world. Programs and projects range from the molecular biology of AIDS vaccines to the epidemiology of cancer; from risk analysis to violence prevention; from maternal and children’s health to quality of care measurement; from health care management to international health and human rights. For more information on the school visit www.hsph.harvard.edu.