Genes influence every aspect of human physiology, development, and adaptation. Obesity is no exception. Yet relatively little is known regarding the specific genes that contribute to obesity and the scale of so-called “genetic environment interactions” the complex interplay between our genetic makeup and our life experiences.

A 2014 study found that consumption of fried food could interact with genes related to obesity, underscoring the importance of reducing fried food consumption in individuals genetically predisposed to obesity. (21)The search for human obesity genes began several decades ago. Rapid advances in molecular biology and the success of the Human Genome Project have intensified the search. This work has illuminated several genetic factors that are responsible for very rare, single-gene forms of obesity. Emerging research has also begun to identify the genetic underpinnings of so-called “common” obesity, which is influenced by dozens, if not hundreds, of genes. In addition, research into the relationship between certain foods and obesity is shedding more light on the interaction between diet, genes, and obesity.

What’s increasingly clear from these early findings is that genetic factors identified so far make only a small contribution to obesity risk-and that our genes are not our destiny: Many people who carry these so-called “obesity genes” do not become overweight, and healthy lifestyles can counteract these genetic effects. This article briefly outlines the contributions of genes and gene-environment interactions to the development of obesity.

Several rare forms of obesity result from spontaneous mutations in single genes, so-called monogenic mutations. Such mutations have been discovered in genes that play essential roles in appetite control, food intake, and energy homeostasis-primarily, in genes that code for the hormone leptin, the leptin receptor, pro-opiomelanocortin, and the melanocortin-4 receptor, among others. (1)

Obesity is also a hallmark of several genetic syndromes caused by mutation or chromosomal abnormalities, such as Prader–Willi and Bardet-Biedl syndromes. In these syndromes, obesity is often accompanied by mental retardation, reproductive anomalies, or other problems. (2)

In the 21st century, obesity is a health problem affecting rich and poor, educated and uneducated, Westernized and non-Westernized societies. Body fat level varies from person to person, however, and some people have always tended to carry a bit more body fat than others. Evidence from animal models, human linkage studies, twin studies, and association studies of large populations suggests that this variation in our susceptibility to obesity has a genetic component. But rather than being controlled by a single gene, susceptibility to common obesity is thought to be affected by many genes (polygenic).

Twin studies offer some insight into the genetics of common obesity. Based on data from more than 25,000 twin pairs and 50,000 biological and adoptive family members, the estimates for mean correlations for body mass index (BMI) are 0.74 for monozygotic (“identical”) twins, 0.32 for dizygotic (“fraternal”) twins, 0.25 for siblings, 0.19 for parent-offspring pairs, 0.06 for adoptive relatives, and 0.12 for spouses. (3) The strong correlation for BMI between monozygotic twins and its attenuation with lesser degrees of shared genes suggest a strong genetic influence on BMI. However, this conclusion is based on the assumption that identical and fraternal twins have the same degree of shared environment-and it’s an assumption that may not hold in practice.

A genome-wide association study scans hundreds of thousands of genetic markers across thousands of individuals’ complete sets of DNA to find gene variations that may be related to a particular disease. These studies can be used to find gene variations that play a role in common, complex diseases such as obesity. Often, a change in just one small section of the DNA that encodes for a gene can make a difference in the gene’s action. These tiny DNA variations, called “gene variants” or “single-nucleotide polymorphisms” (SNPs), are often related to disease risk. 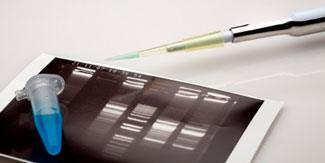 In 2007, researchers using genome-wide association studies identified the first obesity-related gene variants in the so-called “fat mass and obesity-associated” (FTO) gene on chromosome 16. (4, 5) These gene variants are fairly common, and people who carry one have a 20 to 30 percent higher risk of obesity than people who do not. The second obesity-associated gene variant that researchers identified lies on chromosome 18, close to the melanocortin-4 receptor gene (the same gene responsible for a rare form of monogenic obesity). (6, 7)

To date, genome-wide association studies have identified more than 30 candidate genes on 12 chromosomes that are associated with body mass index. (8–10) It’s important to keep in mind that even the most promising of these candidate genes, FTO, accounts for only a small fraction of the gene-related susceptibility to obesity. (11)

Gene-Environment Interactions: Why Heredity Is Not Destiny

Genetic changes are unlikely to explain the rapid spread of obesity around the globe. (1) That’s because the “gene poolthe frequency of different genes across a population-remains fairly stable for many generations. It takes a long time for new mutations or polymorphisms to spread. So if our genes have stayed largely the same, what has changed over the past 40 years of rising obesity rates? Our environment: the physical, social, political, and economic surroundings that influence how much we eat and how active we are. Environmental changes that make it easier for people to overeat, and harder for people to get enough physical activity, have played a key role in triggering the recent surge of overweight and obesity. (12)

Work on obesity-related gene-environment interactions is still in its infancy. The evidence so far suggests that genetic predisposition is not destiny-many people who carry so-called “obesity genes” do not become overweight. Rather, it seems that eating a healthy diet and getting enough exercise may counteract some of the gene-related obesity risk.

In 2008, for example, Andreasen and colleagues demonstrated that physical activity offsets the effects of one obesity-promoting gene, a common variant of FTO. The study, conducted in 17,058 Danes, found that people who carried the obesity-promoting gene, and who were inactive, had higher BMIs than people without the gene variant who were inactive. Having a genetic predisposition to obesity did not seem to matter, however, for people who were active: Their BMIs were no higher or lower than those of people who did not have the obesity gene. (15)

Subsequent work on the relationship between the FTO gene, physical activity, and obesity yielded contradictory results. (16–18) To arrive at a more definitive answer, investigators recently combined and re-analyzed the data from 45 studies in adults and 9 studies in children-nearly 240,000 people in all. (19) They found that people who carried the obesity-promoting FTO gene variant had a 23 percent higher risk of obesity than those who did not. But once again, being physically active lowered the risk: Active adults who carried the obesity-promoting gene had a 30 percent lower risk of obesity than inactive adults who carried the gene.

Having a better understanding of the genetic contributions to obesity-especially common obesity-and gene-environment interactions will generate a better understanding of the causal pathways that lead to obesity. Such information could someday yield promising strategies for obesity prevention and treatment. But it’s important to remember that overall, the contribution of genes to obesity risk is small, while the contribution of our toxic food and activity environment is huge. As one scientist wrote, “Genes may co-determine who becomes obese, but our environment determines how many become obese.” (20) That’s why obesity prevention efforts must focus on changing our environment to make healthy choices easier choices, for all.

Where people live and work affects how active they are