How Our Surroundings Can Help or Hinder Active Lifestyles

Whether it’s biking to work or taking the stairs, walking the dog or parking farther away from the store, being physically active offers countless benefits. Research shows that regular exercise makes people leaner, stronger, smarter, and healthier. So why aren’t more people making physical activity a daily habit? Myriad reasons keep many people off their feet, but the so-called “built environment” our man-made world, with its cities and neighborhoods, streets and buildings, parks and paths-plays a major role. Our social surroundings matter, too: Supportive families and coworkers, for example, may make it easier for people to get up and get moving. Where we live, learn, work, and play appears to have a great deal to do with how active we are. (1–6)

This article briefly reviews research on how various settings influence our activity levels, the policies that shape them, and their roles in perpetuating disparities in obesity rates.

Family can be the seedbed for a physically active life. (7,8) Studies show that parents are particularly important as models, encouragers, and facilitators of physical activity in children and adolescents. Their roles include everything from buying sports equipment and taking kids to practice to paying fees and doling out praise. (9,10) Other important factors in raising active children include paternal activity levels and positive reinforcement, maternal participation, sibling involvement, time spent outdoors, and family income. (8,10)

What are the best ways to reach out to parents and in turn, get kids moving? Most family-based programs studied to date have had only limited success in increasing children’s activity levels. (11,12) But programs that take place in the home show some promise, as do programs that include face-to-face meetings or phone calls with parents.

Worksites and Active Commuting to Work

At the same time, worksites are ideal settings to test physical activity programs-controlled environments with easy access to employees through existing channels of communication and support networks. Employers can make stairwells more attractive, safer, and easier to use than elevators, and can put signs by elevators encouraging employees to take the stairs. (17–19) They can build onsite gyms, adopt policies that encourage exercise breaks during the workday, compensate employees for joining gyms, or offer health insurance incentives for physical activity. (14,20)

The U.S. Task Force on Community Preventive Services has found that worksite nutrition and physical activity programs can achieve modest improvements in employee weight; few of those studies, however, changed the work environment to make it easier to be active. (21) Worksite programs that aim to integrate short bouts of activity into the workday routine, through exercise breaks, pedometers, and similar efforts, also show promise for increasing activity. (22)

The built environment is a decisive factor in how people get to work. Sidewalks and protected bike lanes, or the availability of bike storage, may make it easier for people to have active commutes; similarly, access to public transportation may also increase physical activity, since it gives people a chance to walk to and from a train station or bus stop. Lachapelle and Frank (23) found that Atlanta residents who had employer-sponsored transit passes were more likely to meet physical activity time recommendations than those who did not. Another small study found that employees who had bicycle storage in the workplace, as well as cultural support for active commuting, were more likely to walk or bike to work. (24)

Schools and Active Commuting to School 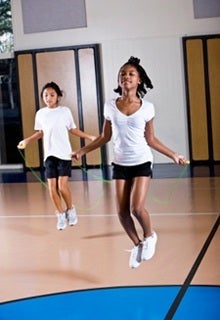 Schools’ sports facilities can also serve the community at large. A pilot study found that opening an after-hours supervised schoolyard increased the outdoor activity levels of inner-city children by 84 percent compared with a matched control community. (27)

Active travel to school has also received attention as an obesity prevention strategy: In 1969, about half of U.S. elementary and middle school children walked or biked to school; in 2009, however, only about 13 percent of elementary and middle school children did. (28) Some, but not all, studies find a link between active school commutes and healthy weight. (29) For example, a recent nationally representative U.S. study found that youth who walk or bike to school tended to be leaner and log more minutes of moderate to vigorous physical activity each day. (30) The study, like many studies of active transport to school, (29) evaluated children at one point in time, however, so it can’t tease out cause and effect.

Where we live affects how we live. Sidewalks, protected bike lanes, street designs that slow traffic and make it safe to cross, parks, gyms, shops and other destinations within walking distance-all of these neighborhood features can make a difference in how active we are. Research on exactly how neighborhood characteristics affect physical activity is growing. But the field is still in its early stages, with limited data from long-term studies. (31) So-called “self-selection bias” remains a concern: Do active people move to neighborhoods with sidewalks and parks, or does living in a neighborhood with sidewalks and parks make it more likely that people will be active? Also, most studies have been carried out in the United States and other developed nations, so results may differ in rural areas and developing countries.

Low-income and minority neighborhoods have fewer recreational facilities than wealthier and predominantly white communities, (32–34) a factor that may contribute to racial/ethnic and socioeconomic disparities in obesity rates. (4) One study, for example, looked at access to recreation facilities in neighborhoods across Manhattan and the Bronx, greater Baltimore, and Forsyth County, North Carolina. It found that minority and low-income neighborhoods were three to eight times more likely to lack high-quality recreational facilities than predominantly white or wealthier neighborhoods. (33) There have been mixed findings, however, as to whether simply living in neighborhoods with more recreation facilities actually leads to more active lifestyles. (1,35) It’s possible that other factors, such as cost, may be a barrier to working out, even when people have gyms nearby. (4) 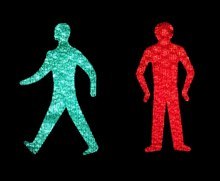 A number of studies have looked at whether living in a “walkable” neighborhood-one that has sidewalks, crosswalks, stores, and leisure destinations-has a positive effect on physical activity, and in turn, body weight. Conversely, researchers have looked at whether living in communities that “sprawl” -those with pedestrian-unfriendly streets, spread-out populations, and larger distances between homes and business areas-makes people more likely to drive rather than walk or bike for transportation or leisure. Some studies have found that living in more walkable neighborhoods, or in communities with less sprawl, is linked to higher rates of physical activity (1,36,37) and lower body mass index (BMI) levels (38–40). However, some studies with stronger research designs don’t find a strong relationship between walkability or sprawl and physical activity; (41) the relationship may vary by age, socioeconomic status, race/ethnicity, and other factors. (35,42)

Risks to safety can run the gamut from reckless drivers and “stranger danger” to bullies in the playground. (44) And there’s evidence that if people believe their neighborhoods are unsafe, children are less likely to play outside, and adults are more wary about walking or taking part in other physical activities. (4,45,46) A recent report found that Los Angeles residents who perceived their neighborhoods as dangerous had significantly higher BMIs than those who considered their communities safe. (47)

Policy is a powerful tool for shaping our environments and lifestyles. Public health researchers are particularly interested in identifying how policy changes and large-scale investments in transportation infrastructure can increase physical activity. (53,54)

In the U.S., federal housing loans and direct subsidies for highway development are two major policy decisions that fueled the rise of sprawling suburban developments during the last half of the 20th century and the early part of the 21st century. (55) Combined with rapid advances in automotive technology and increased manufacturing capacity, they launched an exodus from the inner cities to the suburbs and changed the residential landscape. Nonetheless, local cities and towns can enact land-use policies, such as zoning regulations and building codes, to create community-wide environments that support physical activity. (54) There’s evidence that “mixed land use”-locating residential areas near shops, schools, offices, and other destinations, rather than spread apart-is related to walking and physical activity levels. (1,35,56)

Walking to and from public transportation may help sedentary individuals, especially from low-income and minority groups, meet recommended levels of daily physical activity. (57) Indeed, an estimated 90 percent of public transit trips in the U.S. involve walking at the start or end of the trip. (58) While walking is associated with lower risk of obesity, there’s evidence that car travel has the opposite effect: Frank and colleagues found that each additional hour per day spent in a car was associated with a 6 percent increase in the likelihood of obesity. (59) That’s why the Centers for Disease Control and Prevention recommends that communities improve access to public transportation as an obesity prevention strategy, since better access to public transportation may encourage people to use it. (60) 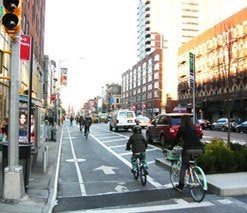 Travel behavior trends in the U.S. could hardly be worse for public health: Recent data finds that U.S. children and adults use bicycles for just 1 percent of all trips. (58) In the Netherlands, by contrast, 27 percent of trips are made by bike. (61) While people in the U.S. are making more trips by walking-10.5 percent of all trips in 2009, up from 8.6 percent in 2001-only about 18 percent walk for transportation, a number that hasn’t budged in the past decade. (58)

Based on successful support of active transport in Europe, a number of policy options have been proposed. Some focus on making streets safer for walking and biking: Reduced speed limits, longer pedestrian crossing times, wider sidewalks, the use of traffic-calming devices (such as plantings) in roadways, auto-free city zones, and protected, dedicated bike lanes are a few approaches. (2,62,63) Other options include offering incentives for leaving the car at home, or making it easier to walk or bike to public transit. London, for example, made comprehensive bike path, bike parking, and traffic safety improvements in the early 2000s, and congestion pricing-where drivers are charged a fee to enter the city-in 2003. These changes have been accompanied by a doubling in bicycle trips and a 12 percent reduction in serious cycling injuries from 2000 to 2008. (64)

In the U.S., the National Complete Streets Coalition advocates for a comprehensive list of policies that local, state, and federal governments can use to make streets safer for drivers, cyclists, and pedestrians. (65) One area of controversy is related to different views on the safest way to accommodate bicycling. Cycle tracks-barrier-protected, bicycle-only travel lanes located next to sidewalks-are one approach used in the Netherlands, which has much lower rates of bicycle injuries than the U.S. Cycle tracks are less common in North America, where transportation guidelines favor cycling on striped bike lanes in the street. A recent study in Montreal, however, finds that biking in cycle tracks is safer than biking on the street. (66)

The Bottom Line: Building an Environment that Supports Active Lifestyles

Our surroundings and the policies that shape them have a substantial impact on where, when, how, and how much physical activity we get on a daily basis. Just as our lack of physical activity is a major contributor to the obesity epidemic, creating an activity-friendly environment is one way to help turn around the epidemic. There are many elements to an activity-friendly environment: buildings, streets, and communities that encourage walking and biking; parks and playgrounds that are plentiful and appealing; and neighborhoods where people feel-and are-safe, to name a few. How can communities begin the task of creating spaces and places that promote activity? They can start by considering the health impact of development and transportation projects, much the same way they consider the environmental impact of these projects. (67) Such changes will be essential to achieve the goal of making physical activity a regular and natural part of people’s daily lives.

31. Ding D, Gebel K. Built environment, physical activity, and obesity: What have we learned from reviewing the literature? Health Place. 2011.

44. Carver A, Timperio A, Crawford D. Playing it safe: the influence of neighbourhood safety on children’s physical activity. A review. Health Place. 2008;14:217-27.